The Balinese Om (or Ongkara) is the symbol of God, creation and the universe.

The most sacred Hindu symbol in Bali and a display of devotion, you can find the Balinese Om symbol at temples, on entrance ways and on flags which are prevalent for the Galungan holiday.

Its shape is taller and more ornate than the Sanskrit symbol of holy trinity.

Bali is home to one of the most spiritual and ancient cultures in the world. Then, it’s not a coincidence that Bali is known as the Island of Gods. The most practiced religion is Balinese Hinduism, called Agama Hindu Dharma, a unique form of Hindu worship woven together with local animism and reverence for the ancestors and Buddhist saints. This article will explore the most important sound that can be heard during mantra chanting and the most important symbol for Hindu: the sacred symbol of “Om", its universal meaning, its origin and its role in Balinese Hinduism.

Religion, culture and everyday life are one in Bali. Over the year, time is regulated by three calendars, which, interlaced together, determine the hundreds of ceremonies happening over the course of the year. For Balinese, there is a day for everything. A blessed day for harvesting, for getting married, for carving wood and even for appreciating cars and motorbikes, known as “metal day”. And the list can go on.

Every little and simple gesture of daily life is laden with profound meanings, tracing back thousands of years. Spirituality here is timeless and during your visit you’ll most likely have the chance to experience one of the ceremonies. Read more about Balinese culture, religion and ceremonies.

What are the origins and blissful meanings of the Om symbol and sound?

Om is the “original sound of the world.” In yoga practice, the sound of “Om” and the mantra “Om Shanti Om” is recited at the beginning and at the end of the practice. It is employed both as a symbol and as a sound in prayers, ritual chanting, sacred performances, yoga and tantra practices. See here the symbol of Om in different skripts, including the Balinese Om.
In the Hindu religion it is considered as Brahman, the highest Universal principle and ultimate reality in the universe, in the form of askshara (word) and sound. There are several stories about its possible origin.

Some sources state that the word might stem from an ancient Indian ascetic tradition and then it was integrated into the Vedic religion. The Upanishad Chandogya, one of the oldest Sanskrit texts of the Sama Veda of Hinduism, tells us the story of how the sound Aum was spoken by the god Brahma while he was meditating over the world he created. That is why Aum symbolised the whole creation of the world. 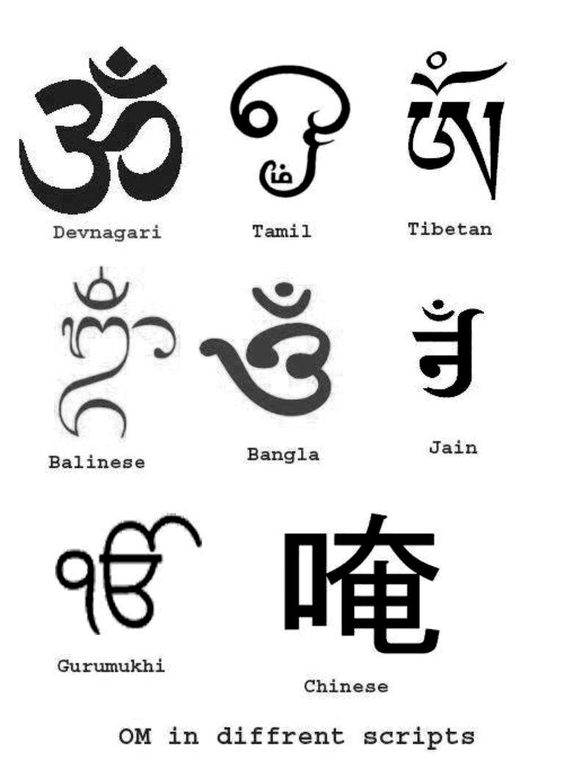 The Trinity in Balinese Hinduism

Om, or Aum, is written in various characters in India and all over the world - including in Balinese Hinduism - according to the alphabet used in different countries. Despite the different representations, its meaning and sanctity remain the same. The “OM” symbol represents everything, “all reality, in all nature”. In Sanskrit the sound “O” is a diathong spelled “AU.” Hence, OM and AUM are different spelling of the same sound and symbol, with the three syllables A-U-M representing the 3-fold division of time. That’s why OM, or AUM is “everything.”
“A”: the waking state
“U” the dream state
“M” the deep-sleep state

When pronounced, after the “M”, at the end of the AUM there’s silence. A pause that represents a fourth state: turiya, or infinite consciousness.

In Hindu philosophies it is common to find divine triads. For example, the three realms of sleeping just explained above; the three most important Hindu Gods and Goddesses, three Vedic scriptures. The symbol of AUM represents such trinity as well, where “A” stands for Brahma, the Creator; “U” for Wisnu, the Preserver of Life; and “M” for “Siwa” the Destroyer.

Covering a tattoo with a new one is the most difficult thing to do, all aspects must be very perfect and have to be more detailed, covering old tattoo

Hi guys, https://www.sidelineinkbali.com/ here we would like to annouce you our amazing tattoo design for male realism black a

In Japanese, ‘koi’ translates to ‘carp’ or carp fish. However, just because the word carries a simple meaning doesn’t ne